How To Have A Healthy Breakup That’s Actually Beneficial 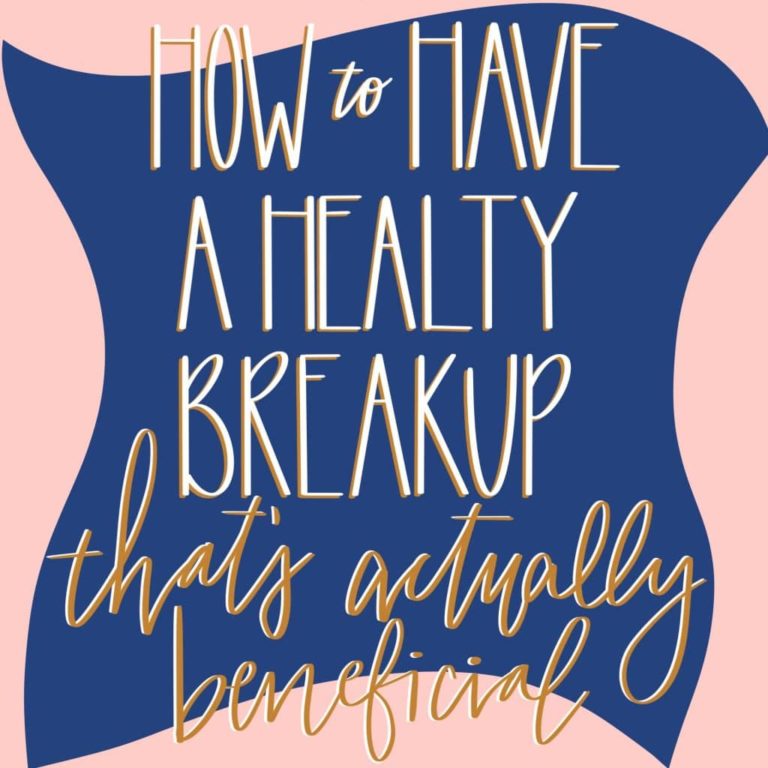 Breakups are the fucking worst— let’s just call them what they are. They’re often hard, confusing, messy, painful, and, simultaneously, completely necessary.

Our society has created stigmas around breakups that add a little extra shame in the mix when we get broken up with (or even when we do the breaking). We typically feel as though we’ve failed, we aren’t good enough, and that for a breakup to be necessary, something has to be obviously wrong with the relationship (or the people we’re breaking up with).

We’re scrapping all those stigmas today because guess what? Breakups are hard and they also don’t have to be bad.

Breaking Up With Our Idea of Breakups

I hope you aren’t married to your view of breakups, because I actually think we need to have a little breakup with how we think about “breakups.”

Once again, I’m taking it back to the media (isn’t it wild how we seem to always come back around to the media?). We typically see breakups portrayed in two ways:

But here’s the thing: Neither of these stigmas are true! Let’s get into why.

Why dating shouldn’t be seen as a successful life marker

Oh, how excited I am to dive into THIS topic! Our society has labeled “relationships” as one of the tiers of a successful life and here are the real facts—relationships (of any capacity) are important, but our relationship status does not, in absolutely any way, define our success.

Whether you are married for 50 years or never marry or live with a life partner (whom you never marry) or have many life partners— this doesn’t add or take away from your innate human value (like, not even a little bit).

Back in the day, way way way back in the day, when the world was far more sexist and gender roles were firmly in place—it was almost mandatory for people to marry to live a sustainable life. Women literally had to marry in order to be given a stipend (by their husbands), property (to live on with their husbands), and social status (to, once again, survive). They would also need to have children to appease their husbands & society, and even gain workers for their livelihood.

Now, we marry because we want to— we marry for sex, love, partnership, connection, convenience— you name it! Thankfully the world doesn’t function quite as it did anymore and we have the freedom to be more independent and design our own life. Marriage isn’t needed to survive anymore and we are much freer to create whatever relationship dynamic we please. It’s not a marker for financial or business success anymore so why is it still a marker for societal success?

Because marriage & long-term relationships are still being considered a sign of life success—another stigma we deal with is that if we are single we are somehow less valuable than people in relationships.

This mentality automatically makes breakups feel like absolute failures when in reality, they are major wins. Let’s talk this through:

Because society labels breakups as “failed relationships,” it makes those who do the breaking up feel like failures, but it also results in people who are in relationships getting praised for being in relationships (when they maybe aren’t even necessarily stoked to be in them). That societal praise is overwhelming and feels kinda wonderful (obviously), so it’s confusing to know if it’s love or possibly just gratification.

Then, when we figure out that maybe it was just that gratifying feeling and you don’t necessarily love the person you’re with (which is different than loving being in relationship—or the feeling of being loved by another person)—that breakup then becomes an acceptance that you and your partner deserve to truly love someone and be whole-heartedly loved in return.

Society isn’t really a fan of us feeling like we deserve, well, anything… We’re taught that we have to work for everything. So this is when that shamey feeling can start to kick in for wanting to initiate a breakup.

Conversely, maybe you do really love the person you’re with but something just isn’t working out and you’re ready to let it go. This is totally just as valid! AND— not only is it a valid reason to breakup but society doesn’t really like this either— because you’re, once again, prioritizing YOUR happiness. And let me tell you— I’ve been in this EXACT situation and it was brutal.

My partner and I love each other very much and when we broke up a few years ago to prioritize our personal growth, people didn’t know how to respond. I would explain that nothing was “wrong” or that nothing “bad” had happened— we just simply wanted to take some space to reevaluate, and explore being single for growth purposes (not that you can’t grow with a partner— you absolutely can!). This confused the heck out of people! They would respond by saying, “No, but what really happened?” As if I was hiding some serious beef!

This honestly made me feel like I had to create problems that didn’t exist, or did exist but weren’t major problems, just to feel like my breakup was “valid.” This kind of response from people makes our brains think that there has to be something wrong in order for us to leave someone. When in reality, sometimes we just choose different life paths—and that’s okay.

I don’t know about you, but I would call prioritizing your happiness and overcoming ridiculous societal expectations is a MAJOR win for you & for whomever you are breaking up from.

Diving deeper into this conversation— any decision that makes you ultimately happier, feels like you are honoring YOU, and is best for all people involved— is a successful decision.

In fact, most things are a massive ‘AND’ situation (again, thank you, Rachel Wright). Meaning, if you are honestly communicating with partners and a breakup feels like the right decision— that’s success, baby.

It’s hard to navigate those emotions and then get the confidence to talk about them with someone when you know it will hurt them. Honestly, we need to support people who are in this uneasy place— it’s so hard to know you might hurt someone and that this is also what you have to do to BE HAPPY. This leads us to how to deal with being on the receiving end of a breakup.

Why breakups aren’t as personal as they feel

A breakup doesn’t have to happen because one partner has an obviously “bad” characteristic. Sure, sometimes there’s a characteristic of our partner(s) that’s a deal-breaker for us but typically, we find those deal-breakers out before we’ve even really started a relationship. Most of the time, breakups actually come down to lifestyle, timing, and differing commitment levels—it typically doesn’t have anything to do with us as people.

I get it—it’s so, so normal to take breakups personally— they indeed feel SO personal. However, think about the times you’ve broken up with someone. It’s likely because of one of those three things. We don’t tend to be in relationships with people who we don’t already like (at least a little bit), so ultimately it comes down to logistics, right? It’s never usually as personal as it feels.

The real problem is that we weren’t taught how to break up with each other. We were shown in movies and TV shows that it needs to be a dramatic blow-up or relatively insensitive where the couple hates each other after—there generally isn’t an in-between. Breakups don’t have to be this way (I know, shocking). Yeah, it might hurt and be hard, but breakups can be a calm discussion and more simple than you might think. This brings me to communication—our fav topic!!

We’ve heard it in countless romcoms, “It’s not you, it’s me.” Or “I just really need to take some time to work on myself.” These can all be true AND absolutely unhelpful when it comes to giving someone we are breaking up with peace (or if you’re the person being broken up with, it can feel like it is absolutely, 100% a cop-out to the real reason for the breakup).

I think what we don’t typically talk about is how vulnerable it is to break up with someone. It can often be because of something we are personally struggling with, mental health, compatibility, etc.— breaking up with someone takes guts. It’s true. AND breakups will always be so much better if we give our honest whys by communicating with our partners.

Here are some examples:

What’s an appropriate response if someone says this to you? There are two things to remember— 1. Take care of yourself and your needs while also 2. Respecting the space this person is asking for and thanking them for their vulnerability. This may look like saying, “Thank you for being honest with me— I know that took a lot of courage to say. I am sad to be ending this relationship, but also want you to do what’s best for you.”

A response to this could sound like— “Thank you for being honest with me. I’m disappointed, not in you, but in the fact, I won’t be seeing you anymore. I appreciate you explaining to me how you’re feeling and have loved getting to know you.”

Even when it feels messy and hard— remember, that doesn’t have to mean bad. It just means things might be a little uncomfy—and that’s okay.

Breakups can be sad AND good

Now, I’m not going to gloss over how painful, sad, and just plain difficult breakups can feel and be to navigate— they are so, so fucking hard. BUT it is possible for them to be sad AND good.

Sadness, oftentimes because we aren’t taught how to deal with it, equates to, “I made a mistake breaking up with them,” or “this sadness must mean we are meant to be together.” Listen, I hear you. When my partner and I broke up, I felt the same. I felt that my sadness had to result in me taking action because I was uncomfy sitting in my sadness.

Sadness is uncomfy. It’s raw, vulnerable, exhausting, and can feel so isolating. I’m not denying any of that— trust me, I’ve been there. AND sadness isn’t bad. Sadness is a feeling that follows loss, heartache, change, disappointment— it is just that—a feeling. A very valid, necessary, important feeling—but just a feeling. Let yourself feel it! Sink into self-care and let yourself feel— even if it feels really uncomfy (especially if it does).

Moral of the story

As absolutely cliche as this sounds— be true to yourself, always be honest with people (and yourself), and don’t do anything because you think it’s what you are “supposed” to do. Do it because you feel it is best for YOU.

We’re really just now learning all these helpful tools to have the best communication in all our relationships— it’s likely going to feel flimsy, floppy, and weird. And you know what? Let it. It will always be hard, but at the same time, it will get easier.