3 Things NOT To Do When Opening Up Your Relationship, From a Divorceé 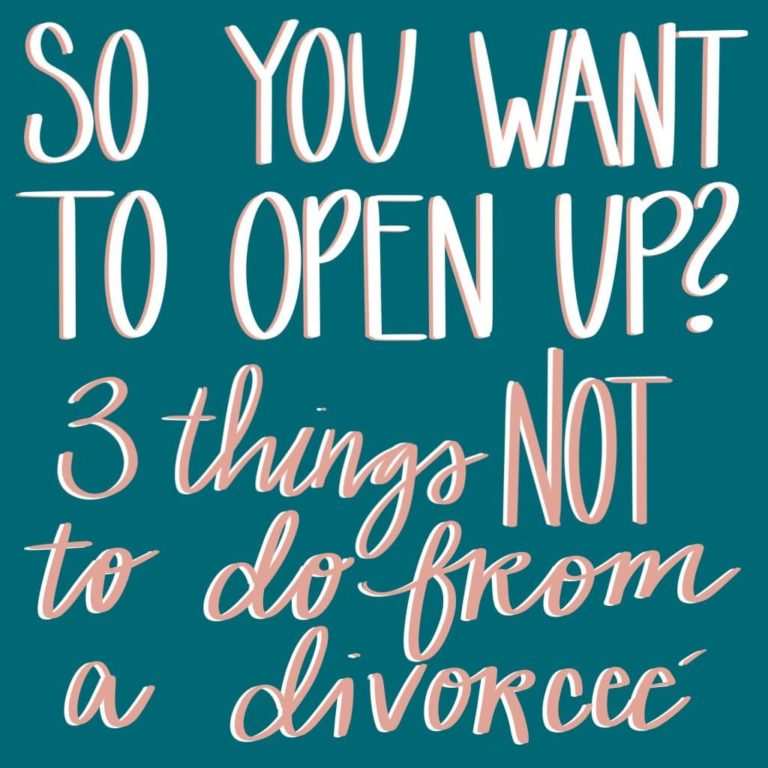 Howdy! How’s it going? What’s that I hear? You wanna open up? You and your spouse/partner are thinking about “opening up” your monogamous relationship?

Congratulations! What an exciting journey you are about to embark on.

My ex-husband and I were once like you – so excited, so innocent, so wildly unprepared for what we were getting ourselves into!

Yes, you heard me right. I said “ex”-husband.

Wait! Don’t run away! I’m not trying to scare you off, and I’m not being smug (well, maybe a little). I’m proudly polyamorous! I believe that non-monogamy – in its many forms – is a valid and vital relationship style. That doesn’t change the fact that opening up was ultimately a pathway to divorce for my ex-husband and me. As Rachel would say, “that’s an AND.”

I learned a LOT from that experience, and I would LOVE to tell you what NOT to do if you are considering opening the doors to your monogamous relationship! Here are 3 things NOT to do when opening up your relationship.

You are probably opening up your monogamous relationship because something isn’t working.

Most of us were raised in an environment where the “default” is monogamy. Monogamy is assumed to be the norm. It’s what’s expected. We’re not taught to question it. We’re often not taught that it’s even a choice. That, of course, isn’t true! Consenting adults can have as many loving, intimate relationships as they want. The practice of being open and honest about having multiple sexual and romantic partners is known as Non-Monogamy (often referred to as Ethical or Consensual Non-Monogamy).

If the ONLY thing wrong with your monogamous relationship is the fact that it’s monogamous, then opening up is probably going to be a good choice. If you are both feeling mostly happy and fulfilled in the relationship, but you crave the freedom to explore additional partners, it’s a good indicator that this is the right step for you. Congratulations on making it this far and being brave enough to create a relationship that is based on your needs, not what society tells you is “normal!”

The only thing worse than not handling your stuff effectively is inviting more people into the mix and making things more complicated for everyone.

If you are seeking to date other people as a means of avoiding dealing with issues with your current partner, you are only going to exacerbate those issues. Do yourselves a favor and figure out if this relationship is worth saving BEFORE you think about opening it up. Not all relationships are meant to last forever. Do you really need to open this relationship, or do you need to end it and go out into the world seeking out ENM or polyamorous partners who share your values?

If the relationship is worth saving, do the work to build a strong foundation before you consider dating other people.

#2 – Do NOT skip the risk assessment before you open up

One of our strongest psychological biases as human beings is overconfidence! We tend to assume that we’re going to be great at everything we try and that things are going to go well.

One thing that my ex and I failed to do was a risk assessment. We never sat down and asked ourselves what might happen. What are the worst-case scenarios? What would we do if they actually happened?

Some questions that I would urge you to ask together:

This is by no means an exhaustive list! Please add any questions that spring to mind for you. If you and your partner find it difficult to broach these subjects, that’s a good sign that you’ve got work to do on your communication skills before you open up.

And no, do NOT sit there and say, “No one is going to get an STI. We’ll always use condoms!”

That’s the overconfidence talking. Think back. Can you put your hand on your heart and say that you have ALWAYS had protected sex EVERY SINGLE TIME? I bet you can’t. The point of a risk assessment is to think about what you would do IF a worst-case scenario happens. Don’t blow it off, assuming that it could never happen to you. What can go wrong, just might.

The first step in the process of opening up your relationship is to visualize what your ideal open relationship scenario actually looks like. How many people are involved? What are their genders and sexual orientations? Would you all live together in a group? Would there be a hierarchy where your formerly monogamous relationship was considered primary? Do you envision dating separately? Together? Both? Are you seeking love with other partners, or just sex? Or both? As you can see, the possibilities and combinations are endless! It is a BIG mistake to think that everyone has the same end goal in mind when it comes to creating a non-monogamous relationship or lifestyle.

My ideal scenario looked like me having other male partners, potentially one of whom was a Dom, who I would date separately, particularly when my ex was away for work (which happened a lot).

My ex-husband’s ideal scenario looked like play-together openness, with us inviting other women into our bed and attending play parties together.

Unfortunately, I am not at all interested in playing with women. Play parties are fun, but I can take them or leave them. My ex strongly resisted the idea of me being with other men and got extremely jealous. Rather than compromising so that we could each get out needs met, we started resenting each other. Some people might have been able to make it work; however, we were both so hurt and disappointed by the mismatch of our ideal visions that it became unsalvageable. Ultimately, we decided it was better to go our separate ways.

It’s all a journey of self-discovery

I don’t regret trying to open up my marriage. Often, monogamous people assume that opening up our marriage broke us up because “that can never work.” I disagree. I am grateful for the lessons non-monogamy taught me about my values, needs, and desires. If we hadn’t tried opening up, we might both still be clinging to a marriage that wasn’t allowing us to be our authentic selves.

I am now happily solo-polyamorous.

I live alone and maintain multiple fulfilling relationships in different ways (including my beloved Dom!). Non-monogamy was a crucial pathway to self-discovery that I am grateful for. I hope my hard-won lessons can help you prepare for your journey into the unknown. It’s not always going to be easy, but it will be worth it.

If you’re interested in learning more about non-monogamy, check out Rachel’s workshops. Or fill out this form to work with one of Team RW’s coaches or clinicians.