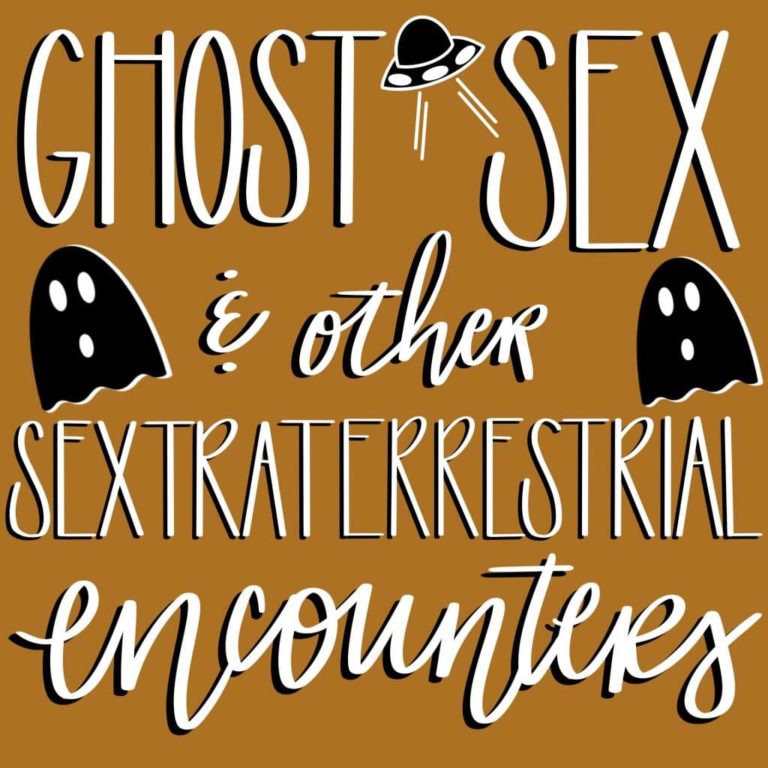 Alright, babes— it’s SPOOKY season (*cough* the best time of the year *cough*). In honor of this stupendous time of year, I’m bringing you some fun, sextraterrestrial stories about sex with otherworldly beings, earth-bound spirits, modern-day vampires, and just how many people believe they have seen ghosts. Grab your fave spooky drink & jump on your witchy broomstick— it’s going to be a chilling ride!

First things first, let’s look at some spine-chilling statistics about ghosts and aliens to see what we’re working with here. An article from the Independent surveyed 2,000 people and over half believed they had been involved in a supernatural experience. 40% also believed their pets had encountered spirits. One in three people believed they had stayed in, lived in, or visited a haunted home—those are pretty chilling stats!

Aliens, surprisingly or not-so surprisingly, have even higher stats than that of paranormal beings. 65% of Americans, based on this article from Pew Research Center, believe that there is absolutely intelligent life that exists outside of earth. Amongst that same 60%, they don’t believe UFOs to be a threat when spotted. Now that we know what we’re working with, are you ready to hear some sextraterrestrial stories??

Why Have Sex With Humans When You Can Have Ghost Sex?

Let’s be honest, most of us got a little *weird* being so cooped up during quarantine. Whether you developed 104 new hobbies, started having full-on conversations with your pet, or started having sex with your friendly neighborhood ghost— we each handled the stress of lockdown differently, am I right?

For one woman, she found solace in developing a relationship with a ghost residing in her home. The friend of this woman would often check in on her during the extensive lockdown period because her friend lived alone. Over the course of lockdown, her friend would casually make jokes about her ghost, John. Then the jokes started turning into stories, but not just your average, “oh my silly ghost” stories— nope. They started turning into stories about her and John getting into fights, having make-up sex, and developing a real relationship together. Though the friend was a little shocked about her friend having a relationship with a ghost, it also seemed rather harmless. Who’s to say—maybe ghostly relationships are the new black.

Now, if you ARE going to participate in a romantic or sexual relationship with a ghost– we aren’t going to yuck your yum… Instead here are some ghouly guidelines we’d suggest you follow (note: these apply to living humans too):

Human Babies Are So Last Season

Nowadays, you can pick the eye color, hair color, and other features of your unborn child— if you so desire, that is. But for some people, it’s not about what their human baby will look like… For some people, it’s about creating hybrid babies with earth-visiting aliens. Sound enticing?

A group of women living in Arizona claim to have been taken up into alien spaceships where they engaged in “the best sex of their lives” and helped birth human/alien hybrid babies. Although, alien pregnancies are not like that of earthly ones where the mother grows the baby for nine months. Instead, the female’s eggs are used to grow the child within the spaceship and because the mothers are worried their babies (because of their extraterrestrial appearance) will be made fun of on earth, the children grow up in the spaceships with their fathers. Click here to see drawings of what the alien hybrid babies look like!

Many people actually believe that aliens aren’t just otherworldly beings, but in fact, there are aliens already living on our planet. Many people believe there are underwater aliens— you know how so many different types of sea creatures and fish can literally just… glow?  Maybe it’s because of some crazy evolutionary shift over thousands and thousands of years— or maybe, just maybe— they aren’t from this world at all.

Modern Day Vampires in Your Neighborhood!

Extra, extra! Read all about it—it being how (if you’re lucky) you just might have vampires living in your neighborhood! A married couple living in Austin, Texas—Logan & Daley—identify themselves as modern-day vampires (and yes, they indeed drink blood). The couple is referred to as the King & Queen of vampires in the Austin area and has been ruling for the past six years. They believe that most vampires awaken during puberty (much different than how vampires are come to be in the media) and believe that it isn’t something you choose, but that in fact, chooses you.

From my understanding of vampires, I believed that for vampires to live, they needed to live off human blood alone. But for Logan and Daley, they are filled up on anything that involves human energy—blood, sex, or physic. Because they are part of a vampire community, they are given blood from donors so that way they don’t have to hunt themselves. Daley says in this video that once a month she drinks blood from a donor because she has to for her health. During her awakening, she began to feel an intense thirst that wasn’t being quenched (no matter how much water she drank). Once her donor had Daley sip their blood, her thirst was quenched—completing her awakening as a vampire.

Whether or not Logan and Daley really are vampires, they are in a consenting community that accepts them for who they are and where they are free to explore all the things they desire. And hey—that’s pretty magical if you ask me.

Be Well & Be Spooked

Whether or not you believe everything or absolutely nothing you read today, it’s fun to learn about the possibilities of this world (or other worlds), what other people believe, and honestly—it’s just fun to be a little spooked sometimes! Happy Halloween!